Background: Thoracic surgery is a common treatment for a variety of pulmonary pathologies. In the US, approximately 530,000 general thoracic surgeries were performed in 2010, with demand continually increasing. Many operations require lung isolation achieved through the placement of airway devices including specialized endotracheal tubes (Double-lumen/Univent) and bronchial blockers (Arndt/Cohen/Coopdech/EZ-Blocker®). The EZ-Blocker® allows for rapid deployment under bronchoscope visualization and effectively isolates either lung when properly positioned. This case report presents an interesting failure of this specific device used for a routine operation.

Case Report: A 31-year-old male with a history of Ollier's Disease presented for an elective robotic right lower lobe resection for presumed metastases from a previously excised chondrosarcoma. The patient was brought to the operating room and was induced in a standard fashion. A single lumen 8.0 endotracheal tube was placed, the EZ-Blocker® was prepared and then inserted with bronchoscopic guidance. The EZ-Blocker® was successfully placed and positioning was confirmed with the blue balloon resting in the right main bronchus proximal to the right upper lobar bronchus and the yellow balloon in the left main bronchus. The device was secured and the patient was moved into a left lateral decubitus position.

Once positioned, the placement was again verified via a bronchoscope. The right (blue) balloon was inflated with ~9cc of air at the surgeon's request, and the patient was placed on volume-controlled ventilation. During the initial thoracoscopy, the balloon was deflated and reinflated to ensure lung collapse. At first, the lung isolation appeared adequate but after a few minutes, the surgeon commented that the right lung was moving too much. The positioning was again rechecked via bronchoscope and additional air was added to the blue balloon.

Every 5-10 minutes, the surgeon would again comment on poor isolation, and additional air was added. Interestingly, the peak inspiratory pressures increased following the addition of air to the blue balloon. It was noticed that the yellow pilot balloon appeared to be under pressure, and withdrawing air from this balloon resulted in immediate decreases in PIP. The bronchoscope was reinserted and it was observed in real-time that after air was added to the blue balloon, within 2-3 minutes the blue balloon would deflate and the yellow would inflate. Air was periodically added to the blue and removed from the yellow balloons until the conclusion of one-lung ventilation. The operation finished and the patient was extubated without incident.

Discussion: Inspection and testing of the EZ-Blocker® used after the operation confirmed that inflation of one balloon would cross-inflate the other, essentially resulting in an intra-device air shunt. The partial occlusion of the dependent lung due to this phenomenon would explain the increase in PIP seen on the ventilator. As no obvious damage was seen on inspection, we concluded that a manufacturing defect of this particular EZ-Blocker® resulted in the shunting seen during the procedure. We suggest careful attention be paid to the usage of the EZ-Blocker® to recognize potentially defective devices such as ours. 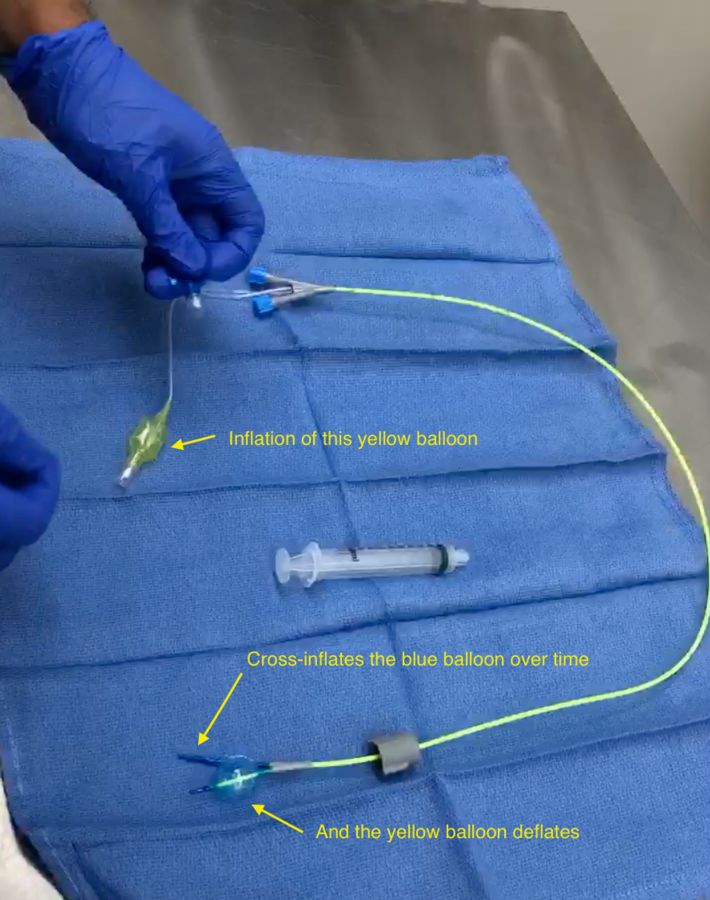