We present a 19 year-old female primigravida with a body mass index of 28kg*m-2 who presented at 40 weeks and 6 days gestation with spontaneous rupture of membranes. The patient had no other medical or surgical history, and her pregnancy course was uncomplicated. Approximately 20 hours after admission, the patient requested an epidural for labor analgesia which was placed by an attending anesthesiologist. The procedure was complicated by an unintentional dural puncture, and the second attempt yielded successful delivery of intrathecal bupivacaine and placement of an epidural catheter.

After delivery, the patient had retained products of conception resulting in postpartum hemorrhage requiring emergent transport to the OR. She had loss of consciousness during transit and was intubated and placed under general anesthesia in the OR. The patient developed disseminated intravascular coagulation intraoperatively and the hospital’s massive transfusion protocol was activated; the patient received 3L crystalloid, 5 units packed red blood cells, 3 units fresh frozen plasma, 3 units cryoprecipitate, and 2 units platelets. Because of continued coagulopathy and acidosis on laboratory work-up, patient was kept sedated, intubated, and transferred to the ICU for further care.

The patient’s ICU course was complicated by hypertensive emergency follow by tonic-clonic seizure with follow-up CT head imaging revealing left frontal small subdural and subarachnoid hemorrhage without midline shift or herniation. Neurosurgery consultation indicated no necessary intervention and further MRI/MRA contrast studies ruled out central venous thrombosis. During this time frame, the patient additionally developed lobar pneumonia, acute kidney injury, and endometritis which were appropriately treated via conservative or antibiotic therapy. After blood pressure management, control of intrauterine bleeding, and correction of coagulopathy with improving laboratory results, the patient was successfully extubated and transferred to the maternity ward for further management. Between postpartum days 3-8, the patient developed symptoms consistent with post-dural puncture headache: moderate to severe frontal and occipital headache with postural component in absence of focal neurological deficits. Her headache was initially treated conservatively with IV hydration and acetaminophen, which did not significantly improve her symptoms. After a multidisciplinary discussion between anesthesiology, neurology, and obstetrics, the decision was made to offer our patient a therapeutic epidural blood patch. In absence of clinical signs of increased ICP and repeat CT head imaging showing stable/resolving intracranial hemorrhage, the patient received a blood patch on postpartum day 8 with resolution of her symptoms. She was discharged home.

Overall, our patient had a post-dural puncture headache with simultaneous intracranial hemorrhage that was successfully treated with a epidural blood patch. This is the first case report to our knowledge that demonstrated safe neuraxial technique with intracranial pathology. Of note, we would like to underscore our multidisciplinary approach in evaluating the risks and benefits of such a procedure, and further highlight the possibility of other less-invasive interventions, such as sphenopalatine ganglion block, greater occipital nerve block, or intrathecal catheter placement, when the risks for neuraxial outweigh the benefits. 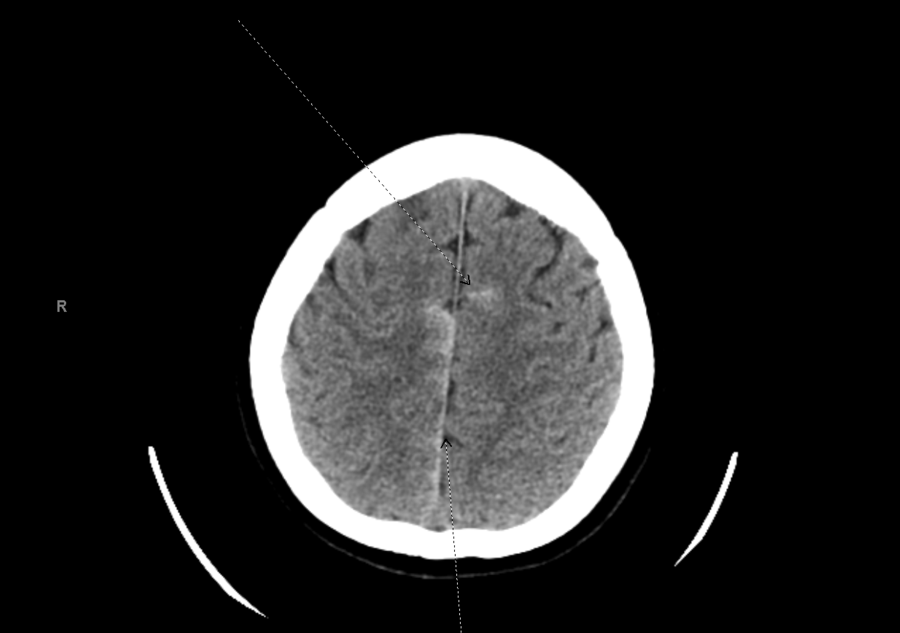