Introduction: Pica, the craving and ingestion of substances with little to no nutritional value, can lead to life-threatening gastrointestinal obstruction through the formation of an indigestible collection of material known as a bezoar (1,2). Here we present a case of gastric and duodenal obstruction as a result of pica in a child with sickle cell disease.

Case Presentation: A 9-year-old girl with sickle cell disease presented to the emergency department with a several-day history of abdominal pain and vomiting.  She was unable to tolerate solid foods and felt something “stuck.” She had no allergies, never had surgery and took no medications. Examination revealed a thin-appearing child with a reassuring airway and unremarkable cardiopulmonary exam.

The patient underwent EGD following rapid sequence induction with propofol and succinylcholine and intubation with a 5.5 cuffed endotracheal tube. The stomach was found to be full of undigested thready fibrous strands. Following 3 hours of attempted decompression, the procedure was aborted, and the patient was transferred to the PICU intubated. Further history obtained from the patient’s mother revealed that she liked to pick at and eat her socks. Pediatric surgery was consulted, and the patient underwent successful surgical removal of a thread bezoar extending from the stomach to the duodenum (Figure 1).

This case illustrates how pica can lead to bezoar formation and intestinal obstruction requiring surgical management. Bezoar formation due to ingestion of thread from clothing has been described in the literature (9,10), but the example described here is remarkable because the mass extends from the stomach into the small intestine, much like trichobezoars described in patients with Rapunzel syndrome (10,11). 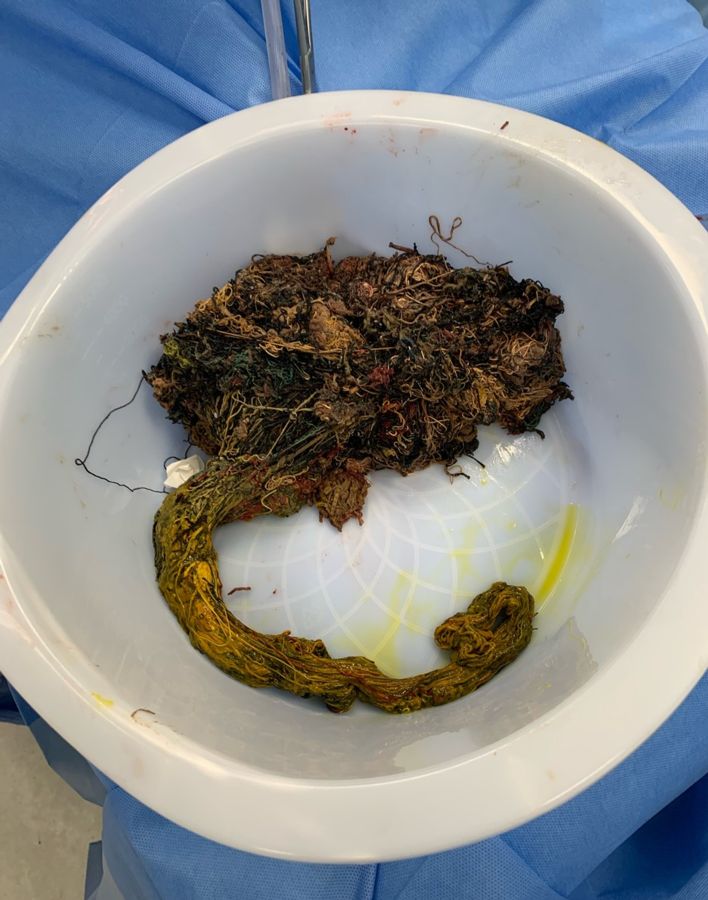