Median arcuate ligament (MAL) syndrome is a clinical syndrome that occurs when the celiac artery is compressed by the median arcuate ligament, resulting in abdominal pain, weight loss, nausea, and vomiting (1). Both laparoscopic and robot-assisted surgical approaches have been utilized to treat MAL syndrome, and celiac plexus block is the most commonly used modality for analgesia (2,3).

Here we describe the use of erector spinae plane (ESP) block for management of pain in robot-assisted median arcuate ligament release and celiac trunk neurolysis in a 60-year-old male. His past medical history included obesity, NIDDM with radiculopathy, HTN, multivessel CAD, CHF with EF 35%, COPD, and CKD.

The patient’s baseline abdominal pain was rated at 10/10 and required hydromorphone 2mg IV q4 hours. Preoperatively, he received oral acetaminophen as well as IV midazolam 2mg, dexamethasone 4mg, and famotidine 20mg. An arterial line was placed, and the patient taken to the operating room, where a 13-6 Hz linear probe was used to visualize the T8 transverse process. 30 mL of ropivacaine 0.5% was injected bilaterally into the ESP.

General anesthesia was induced with propofol and succinylcholine, and the patient’s trachea was intubated. Anesthesia and paralysis were maintained with sevoflurane and rocuronium, respectively. A phenylephrine infusion was utilized to maintain a mean arterial pressure greater than 65 mm Hg. Following completion of the procedure, he was extubated and taken to recovery.

The patient required no opiate in the PACU and was transferred to the floor with as needed hydromorphone IV every two hours. On postoperative day 1 (POD 1), he noted that the ESP block wore off after 8 hours. He required a total of 6 mg intravenous morphine in the first 24 hours and rated his abdominal pain as 4/10. In the next several days, he experienced pain secondary to hepatic hypoperfusion, an expected outcome, as well as diverticulitis. He was discharged home on POD 12 with no pain medication.

Only a small number of MAL syndrome cases are managed surgically each year, and even fewer are performed via robot-assisted approach, which permits improved visualization and microdissection of the celiac artery trunk and potentially reduces postoperative pain (2)

Celiac plexus block is considered the gold standard for the management of pain secondary to MAL syndrome (3), but it is an advanced technique that is challenging to perform. Here we show that ESP block is a viable option for pain management. ESP blocks spread several levels above and below the level of injection, making it attractive for enhanced recovery. While the mechanism of ESP block remains unclear, it most likely provides somatic and visceral analgesia via local anesthetic spread to ventral rami and dorsal rami deep to the erector spinae plane (4). 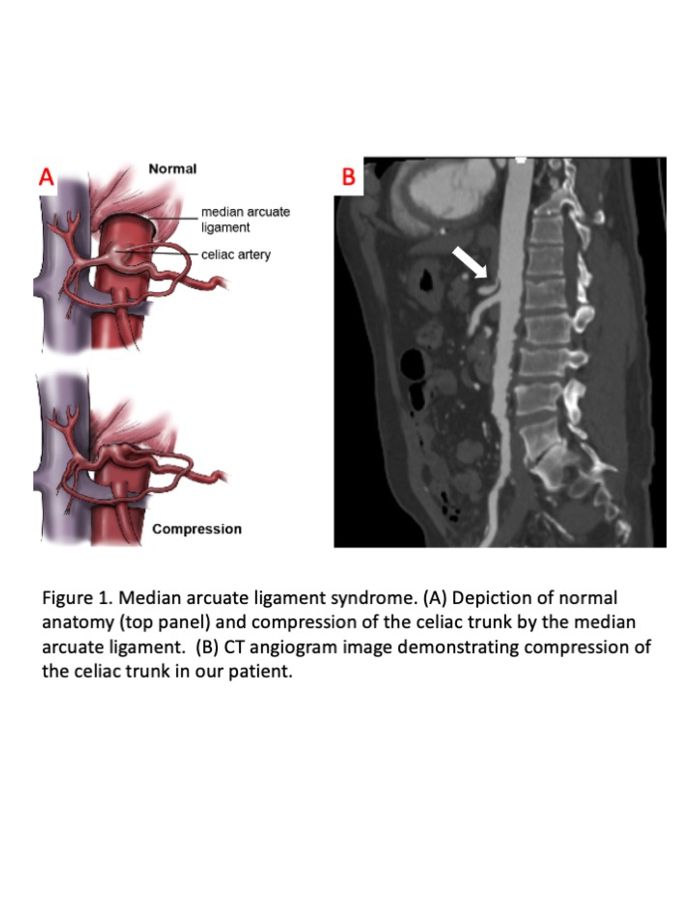