Introduction: Paradoxical vocal cord motion (PVCM), initially termed “vocal cord dysfunction,” is the inappropriate adduction of the vocal cords during inspiration. The exact pathogenesis of this laryngeal dyssynchrony remains unclear, however, several precipitating factors have been identified, such as respiratory irritants, asthma, gastroesophageal reflux, and psychosomatic causes. PVCM remains an important consideration in the differential diagnosis of acute upper airway obstruction, particularly in the perioperative setting. Here we present a case report of post-operative stridor following general anesthesia, where the diagnosis of PCVM was made with video laryngoscopy.

Case Report: A 79-year-old female with history of dementia, hypertension, and chronic low back pain secondary to T12 compression fracture presented after sustaining a mechanical fall from standing. A right femoral neck fracture was diagnosed on X-ray of the extremity. The physical examination was limited due to the patient being uncooperative, and labs were unremarkable. The patient was subsequently taken to the operating room for femoral neck repair. The intraoperative course was uneventful, and the patient’s paralysis was reversed with 200 mg of sugammadex at the end of the case. Immediately following extubation, the patient was noted to have audible inspiratory stridor while remaining hemodynamically stable and saturating 100%. Continuous positive airway pressure was initiated prior to transport to the post anesthetic care unit (PACU). The patient continued to have increased work of breathing and was treated with nebulized ipratropium bromide and albuterol.

A 4 mm flexible bronchoscope was passed through a nasal trumpet and demonstrated vocal cord closure during inspiration and vocal cord opening during expiration. At this time, the ear, nose, and throat specialists (ENT) were consulted and their repeat fiberoptic examination was consistent with PVCM. 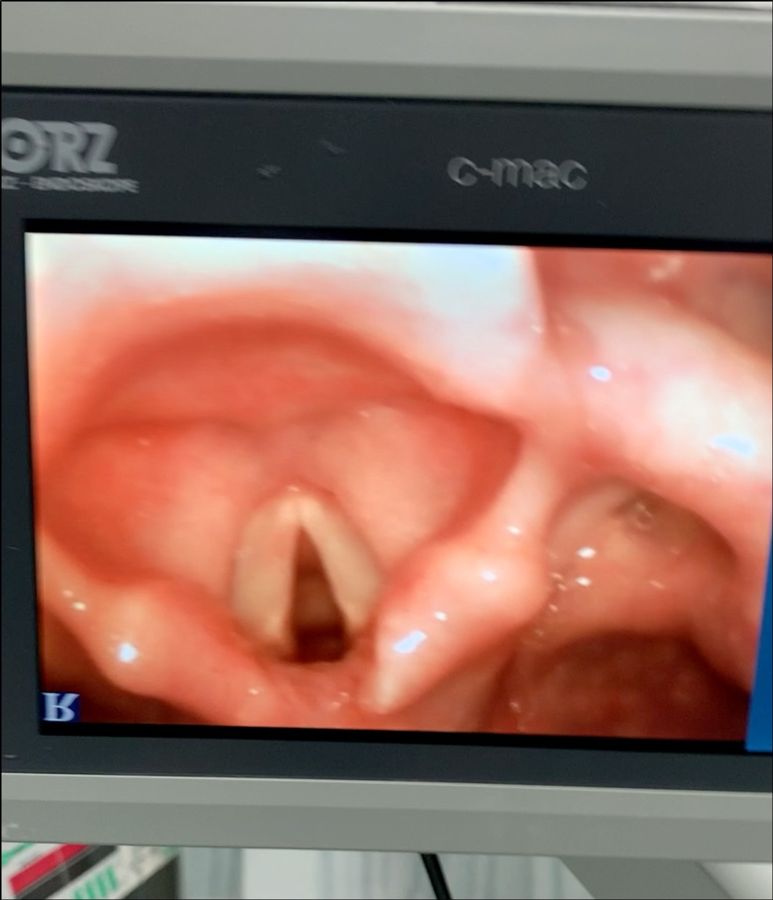 The patient’s arterial blood gas (ABG) resulted in a carbon dioxide (CO2) of 69 and a partial pressure of arterial oxygen (PaO2) of 90. ENT recommended nebulized 4% topical lidocaine to help relax the vocal cords, bilevel positive airway pressure (BiPAP), and low threshold for reintubation with any progression of respiratory distress. Follow-up ABG before BiPAP removal demonstrated a CO2 of 47. The patient was placed on supplemental oxygen via nasal cannula and the stridor resolved.

Discussion: PVCM is an uncommon cause of stridor, particularly in the postoperative setting. The transient nature of PVCM episodes further complicate the diagnosis. Workup considerations include chest radiography, ABG, spirometry, and pulmonary function tests. If PVCM is suspected, it is important to conduct a complete diagnostic workup to exclude other organic causes (respiratory or cardiac) that may require urgent treatment. Furthermore, misdiagnosis and/or failure to recognize PVCM can lead to unnecessary interventions such as intubation and tracheostomy. A pathognomonic finding is the complete adduction of the vocal cords except for a small, posterior, diamond-shaped glottic orifice visualized during inspiration.