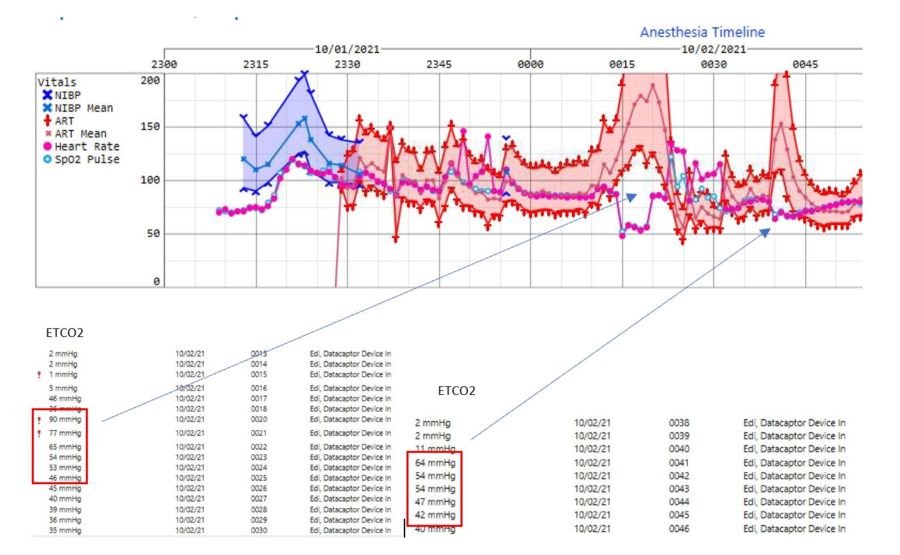 Introduction/Background: Video assisted thoracoscopic surgery (VATS) is becoming more common, especially with the development and increasing popularity of robotic surgeries. VATS procedures are minimally invasive and improve patient recovery time compared to open thoracotomy. VATS procedures often require one lung ventilation (OLV) either with the use of a bronchial blocker or double lumen tube. Once intubation and OLV is achieved, the surgery team uses CO2 for thoracic insufflation-similar to laparoscopic procedures. The insufflation helps improve visualization and ability to manipulate instruments inside the chest cavity. We discuss a case in which thoracic CO2 insufflation led to immediate hypercarbia and severe hypertension; in a patient undergoing an elective left upper lobectomy.

Methods: Patient is a 61-year-old male with a past medical history of recently diagnosed squamous cell lung cancer with no evidence of metastasis, atrial fibrillation—on Eliquis, 20 pack year smoking history, and hypertension; presenting to the hospital for elective left upper lobectomy.

Results: The patient was induced via standard induction with propofol, fentanyl, and rocuronium; and intubated with an 8.0 ETT. A post induction radial arterial line was placed for hemodynamic monitoring and blood draws. After intubation, a bronchial blocker was positioned successfully with the use of a bronchoscope. The surgical team began placing the ports for the procedure, and the ventilator was switched to the bag, and expiratory limb disconnected in order to drop the lungs and provide apnea. When the surgery team began insufflating CO2 into the thoracic cavity for surgical exposure, the blood pressure began to rise almost immediately. The surgery team was made aware, they removed their instruments, and the ventilator was turned on to resume two lung ventilation. End tidal CO2 read as high as 90 mmHg and then slowly came down each minute with ventilation, normalizing after ~5 minutes. After hemodynamic and ventilation control, decision was made to attempt to re-insufflate the thoracic cavity. With repeat re-insufflation, blood pressure again quickly rose, so ventilation was resumed, this time with ETCO2 reading 64 mmHg. Minute ventilation was increased, and blood pressure was treated with appropriate medications. Anesthesia and surgery teams decided to convert to open thoracotomy at this time given the patient’s status and reaction to intrathoracic insufflation.

Discussion/Conclusion: Thoracic insufflation with CO2 for VATS procedures is common and often necessary for appropriate visualization. Carbon dioxide is the gas commonly used for both laparoscopic and thoracoscopic cases because it is nonflammable and extremely soluble. One lung ventilation or apnea is often done during thoracic implementation of scopes and insufflation. During insufflation, if there is a direct path for CO2 to enter the lungs or bloodstream, an extreme increase in end tidal CO2 and PaCO2 can result.