Introduction: Superior Vena Cava(SVC) Syndrome(SVCS) results from partial or complete obstruction of the SVC. Iatrogenic causes of SVCS are increasing in frequency with 71% of nonmalignant cases attributed to intravascular devices like tunneled dialysis catheters(TDC)[i]. SVCS presents with edema, dysphagia, dyspnea, chest pain, and elevated central venous pressures(CVP) due to impaired venous drainage. Yet despite severe obstruction, overt symptoms may be absent with sufficient compensation. The reported prevalence of asymptomatic SVC obstruction varies greatly (3%1 - 82%[ii]). The authors present a case of iatrogenic SVC obstruction from a TDC thrombus in a patient requiring cardiac surgery. Thrombectomy revealed severe underlying SVC stenosis, but the patient never developed SVCS.

CaseReport: 44-year-old female with end stage renal disease(ESRD) presented with acute endocarditis of the mitral(MV) and tricuspid valves(TV). Transesophageal echocardiogram(TEE) revealed large vegetations on the MV and TV and a nearly occlusive thrombosis of the SVC at the site of a TDC (FIGURE 1). Despite significant occlusion, the patient exhibited no symptoms of SVCS. She was deemed a surgical candidate due to severe valvular dysfunction.

The patient remained hemodynamically stable during induction of general anesthesia. Central venous access(CL) was obtained carefully through the right internal jugular vein (IJ). CVP ranged from 17-23mmHg. Cardiopulmonary bypass(CPB) was initiated, and the MV was replaced while the TV was repaired. The SVC thrombus was removed to improve venous drainage. The patient was weaned from CPB uneventfully requiring minimal vasopressor support. After CPB cessation, CVP was >30mmHg despite maintenance of preoperative mean arterial pressures (~70mmHg). TEE demonstrated underlying stenosis of the SVC(FIGURE 2). However, the patient did not exhibit clinical signs of SVCS. The right IJ CL was replaced with a femoral CL. The patient was transferred to the intensive care unit with her head elevated. She was extubated uneventfully on postoperative day one and discharged without ever developing SVCS.

Discussion: SVCS after cardiac surgery is rare. The authors found two cases attributed to malposition of the SVC cannula during MV repair where both patients exhibited overt SVCS[iii],[iv]. However, patients with ESRD and >50% SVC stenosis from TDCs are symptomatic only 18% of the time3. This case demonstrates iatrogenic SVC stenosis from a TDC. Due to chronic SVC obstruction, the patient failed to exhibit SVCS even when thrombectomy revealed severe underlying SVC stenosis. 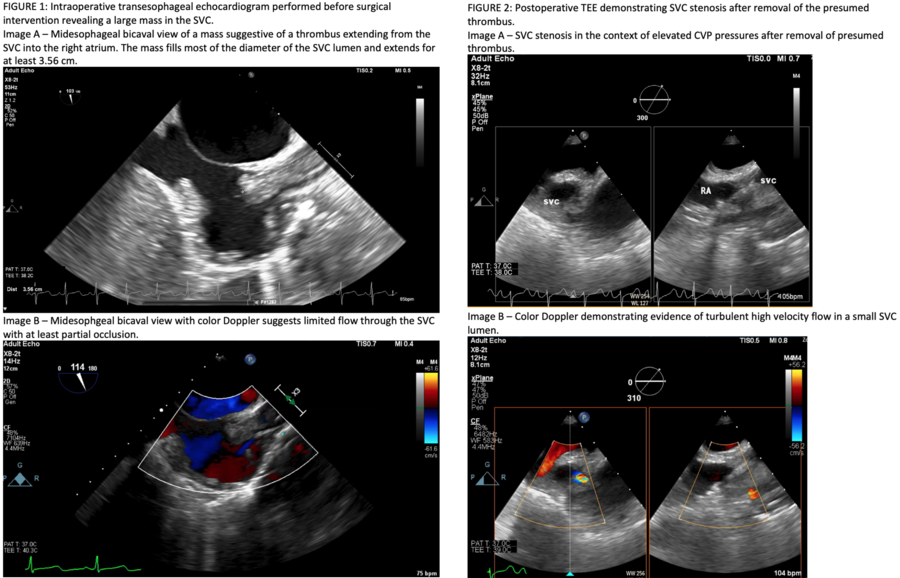