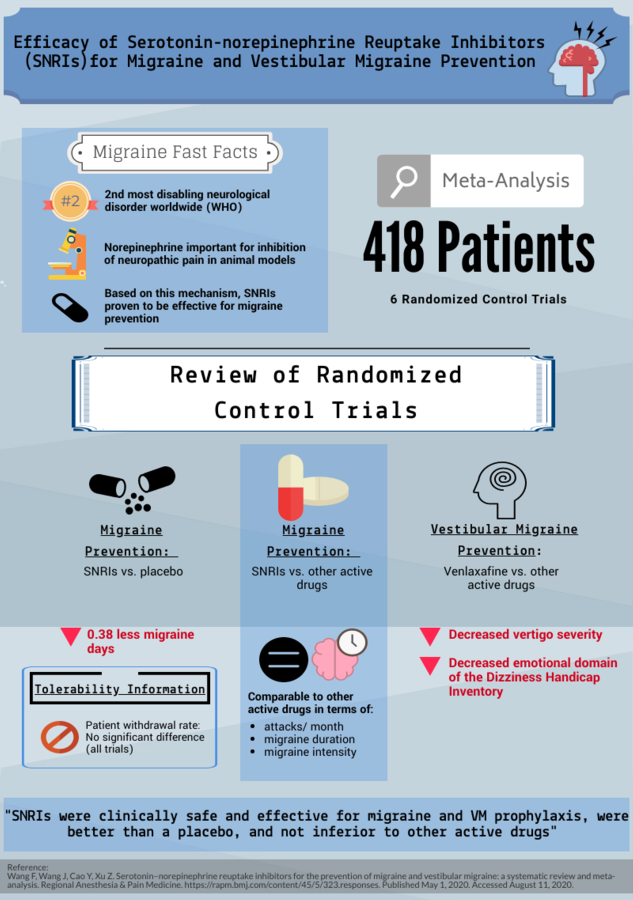 Introduction/ Background: This infographic summarizes a systematic review and meta-analysis of SNRIs in the prevention of migraine and vestibular migraine. Serotonin-norepinephrine reuptake inhibitors (SNRIs) are a widely used antidepressant that block the reuptake of serotonin and norepinephrine. Serotonin is known to play a role in migraine pathogenesis and Norepinephrine has been demonstrated to be an important inhibitor of neuropathic pain in animal models. Together, these mechanisms have led to the investigation of the role of SNRIs in migraine prophylaxis.

Methods: An updated review was performed focusing on the efficacy and tolerability of SNRIsfor migraine and vestibular migraine (VM) prevention. A search of PubMed, Web of Science and Cochrane Library databases was performed. Migraine frequency was the primary outcome while the Dizziness Handicap Inventory (DHI) scores and Vertigo Severity Scores (VSSs) were utilized for VM.

Discussion/ Conclusion: It can be concluded that SNRIs are clinically safe and display efficacy for migraine and VM prophylaxis. SNRIs were better than a placebo and not inferior to any other active drug. SNRIs may be a better choice for VM patients with coexisting psychiatric disorders.