Introduction: Precordial doppler ultrasound is one of the many tools anesthesiologists can use to monitor patients undergoing intracranial procedures in the sitting semi-setting or reverse trendelenburg positions, which carry risk for venous air embolism (VAE). Due to the anesthesiologist’s divided attention and noise from various operating room monitors, early detection of VAE may be missed, despite use of a precordial doppler monitor. Incorporating a software component that could independently monitor the precordial doppler ultrasound and alert the anesthesiologist of possible air entrainment via doppler signal interrogation would provide an excellent opportunity for earlier recognition and treatment of VAE. Generation of such software necessitates collecting data for characterization of potential VAE sound qualities. In a previous study, we showed significant changes in sound intensity occurred when microbubbles were present in the heart for patients undergoing echocardiogram with agitated saline. In this study, we explore whether there are significant frequency changes in doppler audio during the presence of microbubbles.

Methods: Thirteen patients undergoing elective bubble studies for other indications were enrolled in the study. A precordial doppler ultrasound was placed over the right atrium/ventricle of the study participant’s heart in coordination with the echocardiography team prior to injection of the agitated saline during the echocardiography exam. The doppler audio was continuously recorded before, during, and after the injection of agitated saline. The echo video clips that were recorded as part of the bubble study were used as a visual reference for when the microbubbles were present in the heart. The recordings were then analyzed to determine if there were any quantifiable differences in frequency in the doppler audio before and after saline injection using the frequency analysis tool (FFT) in NCH Software WavePad.

Discussion: The average doppler frequency at peak intensity before and after agitated saline administration was used to determine if there were transient changes in doppler frequency. Our data shows that the presence of microbubbles on average transiently increases the doppler frequency twofold at peak intensities. Limitations of the study that produced variability in the data include doppler probe placement, patient variability, and possible inconsistencies in agitated saline quality.  Additionally, the audio files from the first and second trials were not included in the analysis because they were either low quality due to improper probe placement or unable to be opened and therefore analyzed in WavePad. Combining these results from those of our previous study, could be used to construct alarm parameters to aid in earlier detection of VAE during neurosurgery. Future research will utilize the sound qualities frequency and intensity to generate an VAE monitor alert function using software-based audio pattern recognition. 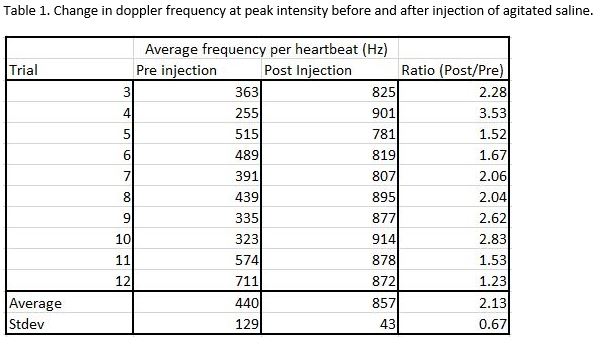 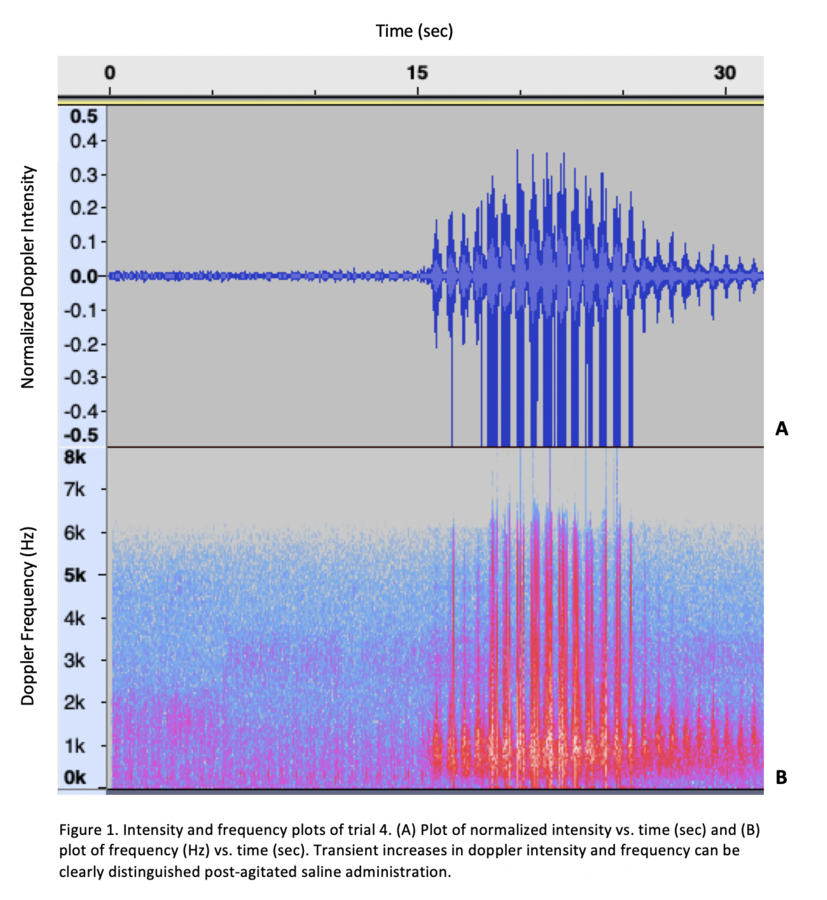 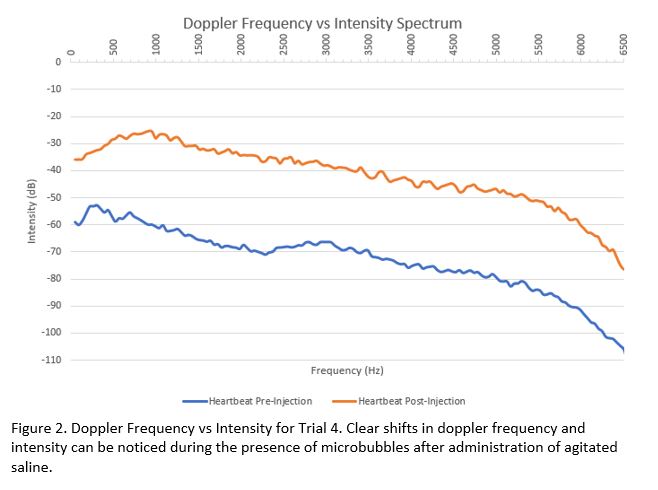