Case Report: A 50-year-old male presented with a history of progressive acid reflux, bloating, and chest discomfort. Endoscopy revealed an enlarged, tortuous esophagus with mild gastritis and a paraesophageal hernia. GI esophogram showed herniation of the entire stomach into the chest cavity. Past surgical history was significant for robot-assisted inguinal and umbilical hernia repairs under general anesthesia with both succinylcholine and rocuronium. Past medical history was significant for creatine and testosterone supplementation as well as anabolic steroid use, which he had stopped two months prior. Preoperative laboratory values included K 4.7 mmol/L, Bun 19 mg/dL, and creatinine 1.55 mg/dL. Estimated GFR was 50, and preoperative hematocrit was 54.9%.

The patient was brought to the operating room and general anesthesia was induced with propofol, lidocaine, and rocuronium. The total procedure time was seven hours and eighteen minutes, and an ultrasound-guided TAP block was performed prior to extubation. Two liters of lactated ringer’s solution were given intravenously, urine output was 500 mL, and estimated blood loss was 50 mL. A chemistry panel drawn in the post-anesthesia care unit showed a serum potassium of 6.9 mmol/L and creatinine of 1.52 mg/dL. No arrhythmias were noted on telemetry. Arterial blood gas sampling showed pH 7.35, pCO2 39, base excess -4.3 and potassium 7 mmol/L. Hyperkalemia was treated with intravenous insulin, dextrose, and albuterol, lowering the potassium level to 5.6 mmol/L. Four hours after surgery, serum potassium was 4.3 mmol/L, phosphate was 3.2 mmol/L, and creatinine kinase (CK) was 1255 units. CK levels peaked at 3209 units on postoperative day (POD) 2 and declined to 1000 units on POD3, when he was discharged home. Serum creatinine decreased to 1.07 mg/dL on POD2 and 0.97 mg/dL on POD3.

Discussion: Postoperative hyperkalemia has been reported following robot-assisted urologic surgery in patients with pre-existing renal insufficiency (4), but this is the first report of hyperkalemia following robotic paraesophageal hernia repair. We believe that mild preoperative renal insufficiency, prolonged operative time, and potassium release due to direct trauma, ischemia, and pressure injury contributed to hyperkalemia. Prior anabolic steroid and testosterone use may have also increased susceptibility of myocytes to injury (5)

This case also illustrates the value of electrolyte and telemetry monitoring in cases with potential for severe hyperkalemia.  While neither telemetry nor serum potassium alone predict the clinical severity of hyperkalemia (1), early detection in this patient permitted rapid treatment and likely avoided progression to an adverse event. 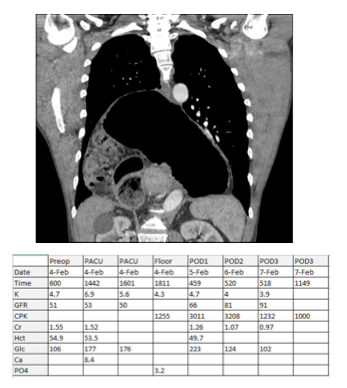