Background: Cardiac arrests during C-sections are usually unexpected and rare. Immediate effective resuscitation efforts are critical to maternal and fetal outcomes. Survival depends on cause and knowledge of differential diagnoses. We report a cardiac arrest during C-section due to undiagnosed anomalous origin of right coronary artery.

Clinical Case: A 33-yo G2P1001 was admitted for trial of labor after C-section. An epidural was placed for labor analgesia. Labor progressed with mother comfortable to full dilation. A vacuum assisted delivery was attempted but converted to Stat C-section due to persistent fetal decelerations. The epidural was bolused with lidocaine 2% with epinephrine and bicarbonate and surgery commenced with no pain on incision despite an equivocal Allen’s test. Patient became restless when the bladder retractor was placed, and general anesthesia was initiated. Baby and placenta were delivered and oxytocin started.  Patient had hypotension unresponsive to crystalloids and colloids, and phenylephrine and vasopressin boluses. Sympathectomy from neuraxial blockade, combined with general anesthesia, was considered. Estimated blood loss was only 500ml at this time with the surgery reporting no active bleeding on the field. Breath sounds clear on auscultation. Sevoflurane was lowered and nitrous oxide was added. Despite resuscitation efforts, bradycardia was noted and small boluses of epinephrine were given (16 mcg and 24 mcg). Hypotension and bradycardia were followed by asystole. ACLS was initiated with high quality CPR and IV Epinephrine 1 mg every 3 minutes. V-fib was noted and shock was administered. ROSC was obtained after 4 minutes. Patient was transferred to the ICU intubated. Discussion with family members revealed that patient had a history of unexplained syncopal episodes, and of cardiac arrest during previous appendectomy, which were undisclosed during anesthesia pre-op evaluation. It was eventually discovered that patient had anomalous origin of her right coronary artery. Patient underwent correction transposition surgery 11 days after her C-section and was eventually discharged home.

Discussion: Precipitating causes of cardiac arrest during C-sections include hemorrhage, primary cardiac events, amniotic fluid embolism (AFE) and high neuraxial anesthesia which were differential diagnoses considered in this case. Hemorrhage was ruled out by estimated blood loss. AFE and high neuraxial blockade could not be ruled out. Regardless of cause, immediate initiation of ACLS protocol is key in management. Delivery of the baby is a contributing factor in survival for maternal cardiac arrests.  In this case, the patient was a poor historian and had an undiagnosed congenital cardiac anomaly. Anomalous origin of right coronary artery is rare and can present as syncopal episodes or sudden cardiac arrest which can occur during exercise or even while sleeping. Sometimes they are diagnosed post-mortem. In this case, history of two episodes of cardiac arrests during surgery warranted further investigation of an underlying pathology, which led to proper diagnosis and management.

Conclusion: We presented a case of a successful resuscitation of cardiac arrest during C-section. Awareness of potential differentials and effective resuscitation efforts played a vital role in this patient’s survival. 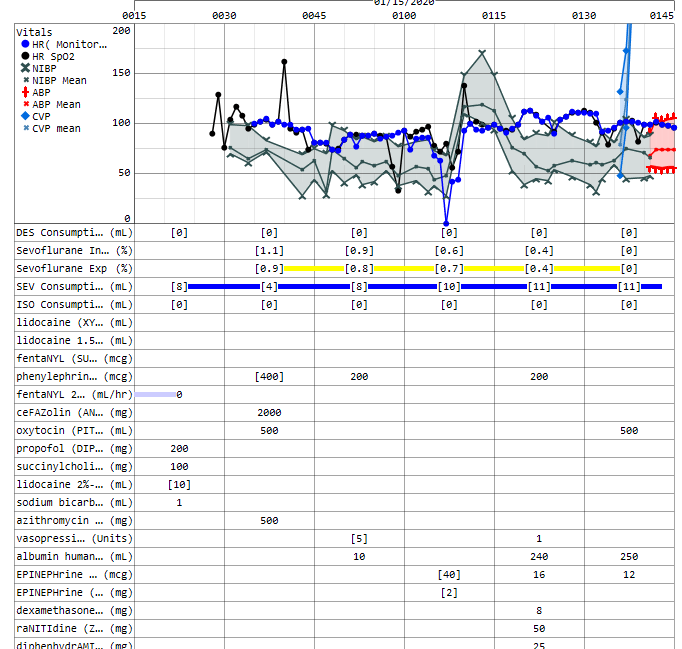