Background: The educational role of simulation is expanding with its use as a tool used in low stake formative assessments or higher stake summative assessments. However, the use of checklists, rating scales and clinical cases can result in different measurement errors which should be accounted for when studying the score reliability of the tool in question. Available reliability coefficients like Cronbach alpha or inter-rater reliability are very useful but insufficient in these situations. When building a simulation curriculum with multiple cases, it is primordial to evaluate the consistency of the participant’s performance during different scenarios. We hypothesize that the Generalizability (G) theory can address multiple sources of measurement error at once to reach powerful reliability coefficient.

Methods: We conducted generalizability (G) and decision (D) studies from the G theory to analyze data obtained from a simulation based formative assessment of crisis resource management skills during pediatric resuscitation. Participants were divided into groups of five to ten. A 15 minutes crash course focusing on major PALS algorithms was followed by a 25 minutes simulated resuscitation exercise using a low fidelity simulator. A 20-minute debriefing session was then performed. The exercise was repeated three days later. The participants were video-recorded and then independently evaluated by two raters using the Ottawa Global Rating Scale (O-GRS) by Kim et al. (2006). We used that data to (1) examine the psychometric characteristics of the O-GRS, (2) illustrate the use of the G theory in measuring multiple sources of error variance in a study design and (3) define the number of cases, raters and items needed for optimal reliability of O-GRS as an assessment tool.

Discussion: Our results suggest adequate reliability of the O-GRS when using two cases, two raters and six items for formative assessment of healthcare provider’s performance in a simulated pediatric resuscitation. This study demonstrates the ability of G theory to determine the number of cases, raters and sources of error required to obtain optimum reliability for assessment. 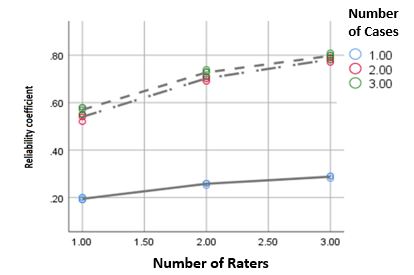