Background: In 1847, Carl Ludwig discovered arterial waveforms via insertion of catheters into arteries.  Since then, equipment has advanced, and Seldinger technique has been adopted, but the purpose of arterial lines remains the same: continuous hemodynamic monitoring and blood sampling.  Arterial line placement requires knowledge of anatomy, equipment, complications associated, and the ability to interpret the waveform. In the perioperative setting, the radial artery is most commonly used for catheterization. This abstract illustrates a new technique for radial arterial line placement, using ultrasound-guided proximal (mid-forearm) insertion.

Technique: Prior to radial artery catheterization, the Allen test is performed to assess collateral supply to the hand. Under sterile conditions, the radial artery is found at the anatomical snuffbox and traced retrograde using a linear ultrasound transducer. The site of puncture is 5 -10 cm distal to the antecubital crease, targeted for where the artery is a) largest in diameter, and b) at least 1 cm deep to the skin (Figure B). The artery is identified by round shape, lack of compressibility relative to surrounding structures, and 2-D color Doppler. A 20-gauge catheter is inserted at a 30-45 degree angle to puncture the artery under direct vision. Once intravascular, the catheter is passed over a guidewire and advanced into the vessel.  The ultrasound probe may be moved slightly proximally prior to passing the guidewire, to ensure that both the needle tip and the plastic catheter are intraluminal.

Discussion: Complications of arterial access include pseudoaneurysms, dissections, thrombus, ischemia, compartment syndrome, and infection. Miller proposed that the ultrasound-guided technique has been proven superior to traditional palpation techniques, with increased first-attempt success rates, decreased procedural time and lower complication rates. Studies have reported that using anatomical landmarks/palpation cannot locate the radial artery in up to 30% of patients. Catheterization of the distal aspect of the radial artery (i.e. at the wrist--where it is most easily palpated) can be difficult due to smaller vessel lumen, and predilection of the artery for significant compression due to underlying wrist bones (Figure A).  Our clinicians use an ultrasound-guided technique for catheterization of the proximal radial artery, taking advantage of greater vessel-to-skin distance (meaning easy redirection of the needle if it is seen to be advancing off-axis). Further, radial artery size increases as it travels proximally, and, at that anatomic level, the vessel does not compress or flatten out during access attempts, since it is adjacent to soft tissue, not bone (Figure C). An informal imaging study on approximately 20 cardiac surgical patients showed that the radial artery measures from 10-30% larger proximally, in comparison to its distal aspect. We have found that real-time ultrasound visualization reduces tissue/vessel trauma and morbidity of catheter placement. Fewer attempts yield decreased rates of hematoma formation and infection. 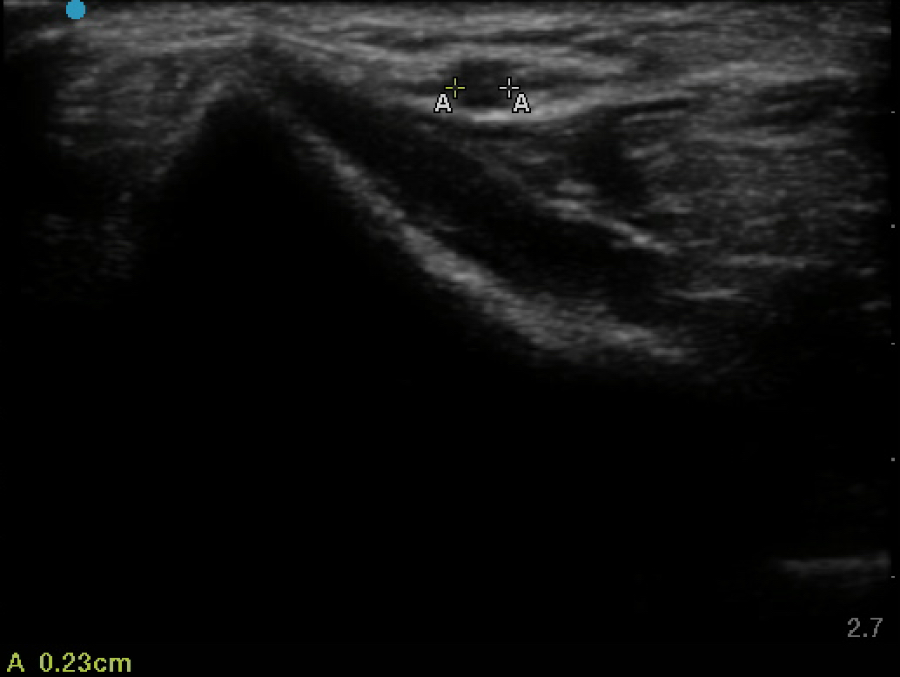 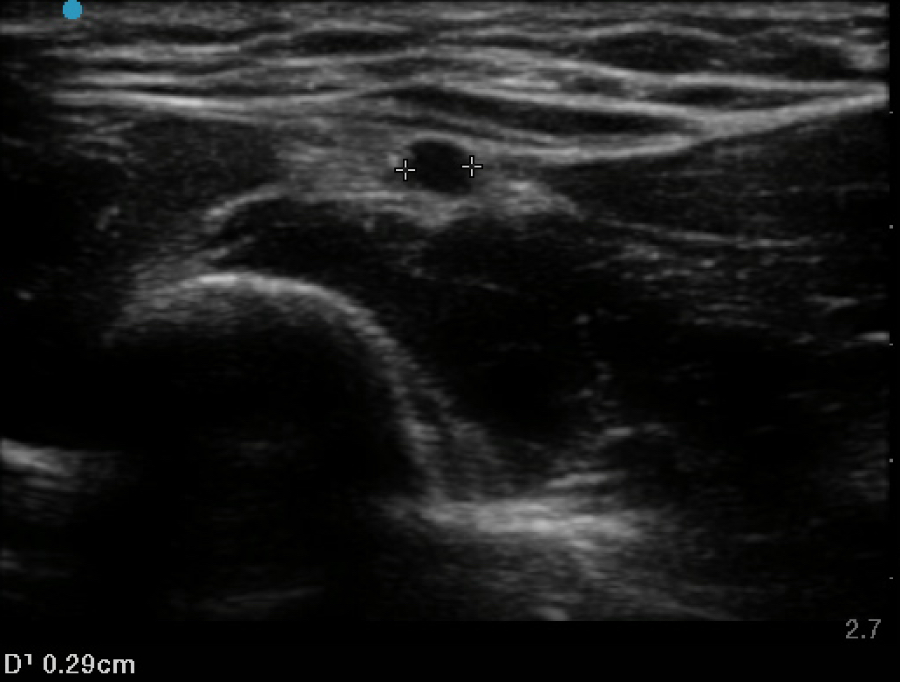 Conclusion: Ultrasound-guided radial artery catheterization should be utilized when available; the technique of proximal catheter placement further reduces complications and morbidity.  The vessel is most easily palpated at the wrist but is most easily accessed at the mid-forearm.