Case: The patient is a 56 year old male who presented for a Whipple procedure in setting of pancreatic head mass. There is no history of coagulopathy and no spinal pathology.  Vital signs were within normal limits and physical exam was significant for jaundice. An epidural catheter was placed preoperatively in the thoracic region in a single atraumatic attempt without complication. No blood or CSF aspirated, negative test dose, no paresthesia.  The surgery proceeded uneventfully and the patient’s epidural infusion was started postoperatively. The epidural solution contained 0.05% bupivacaine and fentanyl 5 mcg/cc at 10 cc/hr with a 4 cc PCEA dose (max 20 cc/hr). Heparin 5000units subcutaneous was started postop for VTE prophylaxis on POD#0.  He was not on anticoagulation prior to surgery and his last dose of subcutaneous heparin for prophylaxis was one month prior during a separate admission.

Hematology recommended started 2.5mg fondaparinux subcutaneous daily. Repeat platelets were 71K. One unit of platelets was transfused and CBC was subsequently redrawn, revealing a platelet level of 86k.  Immediately after CBC result, the epidural catheter was removed with tip intact.  There was no evidence of bleeding, pain, or swelling at catheter insertion site.  Patient denied any focal neurologic deficits.  Fondaparinux was started 6 hours after removing epidural catheter as recommended in the ASRA guidelines, and the patient underwent q4h neuro checks for 24 hours.

Discussion: HIT is treated by discontinuing heparin and implemented alternative anticoagulation agents, such as direct thrombin inhibitors, direct factor Xa inhibitors, or fondaparinux. All of these agents are either contraindicated due to increased risk of epidural hematoma, or lack evidence confirming the safety of their use in the setting of an indwelling epidural catheter.  In this case, we decided to mitigate bleeding risk by transfusing platelets and removing the catheter prior to the administration of anticoagulants to empirically treat HIT.

There have been preliminary studies demonstrating the safety of fondaparinux in conjunction with an indwelling epidural catheter, although the ASRA guidelines caution against this situation. Had fondaparinux been started while the epidural catheter was in place, the extended half-life of the medication (17-21 hours) would have necessitated a minimum of 36-42 hours between the last dose of fondaparinux and catheter removal. 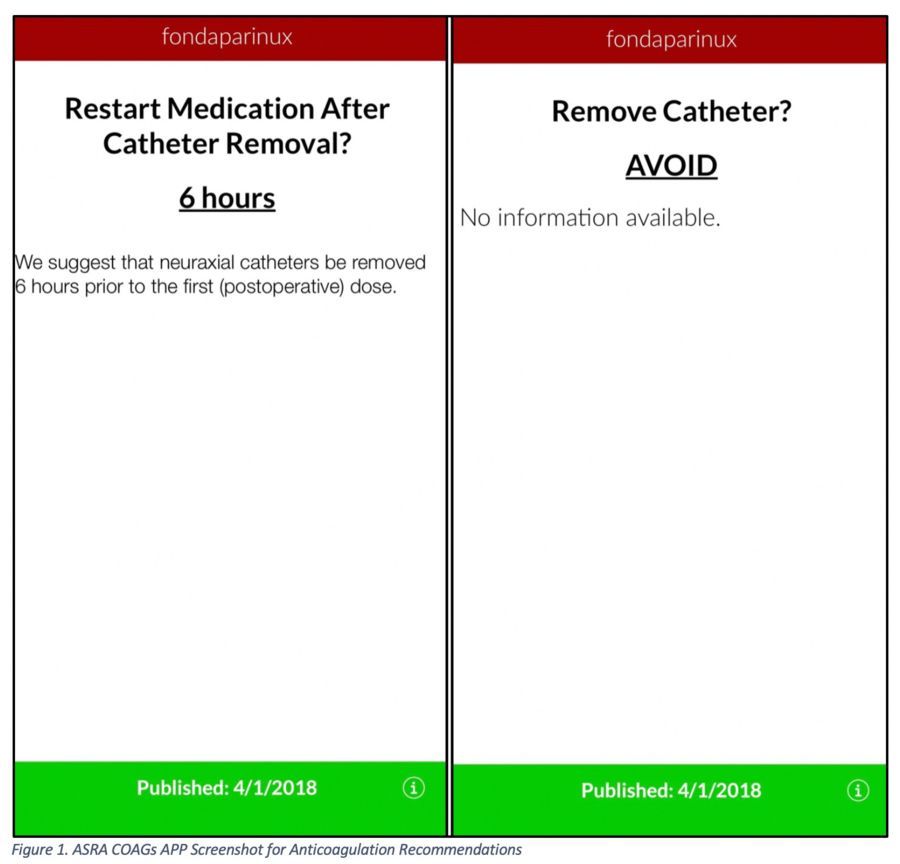