Introduction: Diaphragmatic hernias are an uncommon condition associated with a variety of clinical manifestations. They are often congenital in nature and most often present in the first few hours of life with the clinical triad of respiratory distress, cyanosis, and dextrocardia. In the young adult or teenage population, it is most often due to trauma, and may manifest as atypical abdominal pain and respiratory distress.

Case Presentation: Our case presents the anesthetic management of a 16-year-old male with a medical history significant for a gun shot wound to the abdomen resulting in a nephrectomy and multivisceral transplant with a complicated post-operative course. Patient presented to our institution as a transfer from an outside hospital with fever and abdominal distention associated with multiple episodes of emesis. In the setting of immunosuppression and presence of a central line, a full septic workup was performed, and empiric broad spectrum antibiotics were initiated. Initial septic workup was negative; however, CT of the abdomen revealed an incidental left lower lobe cavitary lesion concerning for a possible abscess. Pulmonary team was consulted, a bronchoscopy and BAL was performed with all cultures coming back negative. Pediatric surgery team was consulted for possible biopsy of the cavitary lesion/abscess as patient showed no improvement on empiric antibiotic and antifungal therapy and was progressively noted to be hypoxic with frequent desaturations to high 80’s requiring up to 5L of supplemental oxygen. An MRI of the of the chest and abdomen was performed prior to surgical exploration and revealed a possible small diaphragmatic hernia in proximity to the previously suspected cavitary lesion. A left sided VATS for surgical management was performed. Anesthesia was induced uneventfully through patient’s existing broviac and airway was secured with a size 8.0 endotracheal tube. Lung isolation was obtained via an EZ blocker that was inserted and guided to the carina with the aid of a fiberoptic bronchoscope and its location was confirmed with bilateral breath sounds. A left side radial arterial line was placed for hemodynamic monitoring and frequent blood gas analysis. Intraoperatively, the left lung was isolated, and confirmed with positive breath sounds on the right side, and direct visualization a deflated left lung by the surgical team. Intraoperatively, anesthetic course was complicated by frequent gradual oxygen desaturations requiring 100% oxygen and increasing amounts of peep to the ventilated right lung to maintain an oxygen saturation above 95%. Surgical team visualized chronic lung adhesions requiring decortication of the left lung, and an incarcerated loop of colon protruding through a small diaphragmatic defect that was repaired. A chest tube was inserted, that was complicated by an air leak attributed to a pulmonary tear from the adhesiolysis. Postoperatively patient was extubated and transferred to PICU for further observation.

Discussion: In conclusion, our case describes the anesthetic management of a teenage patient with atypical abdominal pain and hypoxia in the setting of a diaphragmatic hernia requiring one lung ventilation for a VATS that was complicated by chronic lung adhesions leading to frequent gradual oxygen desaturations intraoperatively. 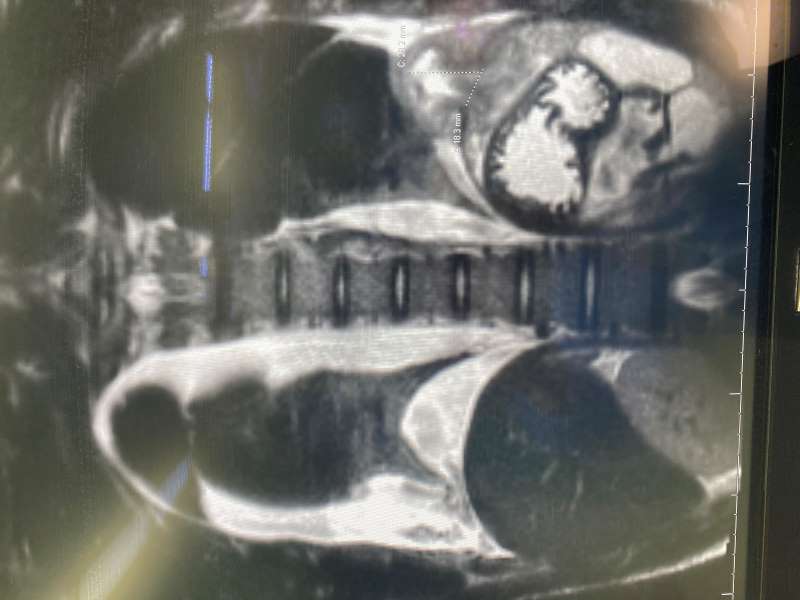