P029: THE CRITICAL DECISION: WHAT TO DO WHEN YOUR PATIENT HAS CLOTTING WITHIN THE CARDIAC BYPASS CIRCUIT
Kevin Voisin; Todd E Jones; University of Florida


Introduction/Background: We present the case of a 55 year old male who received Left Ventricle Assist Device (LVAD) placement under general endotracheal anesthesia. His past medical history was significant for Chronic Ischemic Cardiomyopathy (EF 15%) on home dobutamine and IV diuretics and recurrent deep vein thrombosis with Heterozygous Factor V Leiden mutation on chronic anticoagulation. Preoperatively, the patient was receiving low dose heparin infusion which was stopped six hours prior to surgery. After initial pre-bypass heparinization of 300 units per kilogram, ACT was confirmed at <400 and per our protocol a second dose of 300 units per kilogram was administered. ACT was then confirmed at >1000. Cardiac bypass was initiated and LVAD placement proceeded without issue until the final sutures were being placed. At this time we were notified by our perfusionist that thick sludge, consistent with thrombus, had begun to form in the venous reservoir despite consistent ACTs >1000 for the duration of bypass. A back up bypass circuit was primed, our ACT readings were confirmed on a new ACT machine and the surgeons were notified. We had a separate perfusion team on standby with the primed backup bypass machine. Over the next 20 minutes a thick layer began to form at the top of the venous reservoir with clot (Figure 1). We again notified the surgeons and they worked quickly to finalize the surgery. During that time the LVAD was deaired and confirmed to be functioning properly. After discussion between our anesthesia and surgery teams it was decided that we would slowly administer one half of the normal dose of protamine with target ACT around 200. We then carefully ramped up on the speed of the ventricular assist device as we weaned cardiopulmonary bypass. Hemostasis was achieved and the chest was closed without complication. In the Intensive Care Unit the patient was started on a low intensity heparin infusion twelve hours post-op after hemostasis was confirmed and on post-op day one he was transitioned to full intensity heparin infusion.

Discussion: Factor V Leiden can present with multiple coagulation concerns during cases requiring cardiac bypass. Our primary concern in this unique case was clot formation in the venous reservoir despite consistent ACT readings >1000 requiring a critical decision of how to proceed. Fortunately during this case we were nearing completion of the LVAD placement and the surgeons were able to finish rapidly without complication. Were the clots to have formed earlier in the case or if the case required a longer bypass run we would have transitioned to a different anticoagulant. Ideally we would use an anticoagulant with a different mechanism of action from that of heparin such as a direct thrombin inhibitor like bivalirudin or argatroban. Our backup plan was to transition to a new primed bypass machine with our second perfusion team on standby. 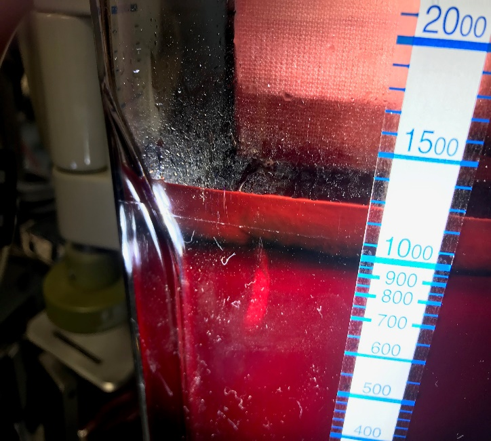 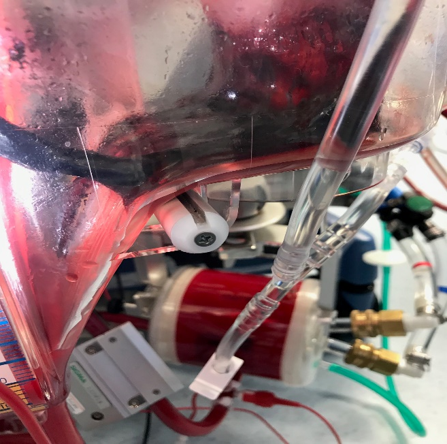