Case: A 70-year-old, 60-kg male with history of hypertension and hyperlipidemia presented for 3-vessel coronary artery bypass grafting (CABG) after a recent positive nuclear stress test. His pre-operative work-up was pertinent for a normal transthoracic echocardiogram and a CT chest without contrast that was negative for pulmonary embolism (PE) but showed considerable aortic calcification and right pleural thickening/scarring at the right lower and upper lobes. No amiodarone was given pre-operatively.

The 3-vessel CABG proceeded with no complications or issues weaning off bypass. Post-operatively (POD0), he was extubated a few hours after arriving in the ICU and was started on an amiodarone infusion for the following 24 hours and heparin prophylaxis. After the amiodarone infusion, oral amiodarone 400mg TID was started for the next 5 days. He was transferred to the step-down unit on POD1.

Since extubation, he required 2-4L oxygen due to oxygen saturations ranging from mid-80s to low-90s. During this time, he demonstrated mild splinting but no significantly increased respiratory effort. He was maintained on a negative fluid balance for several days with furosemide and MetaNeb System therapy with mild improvement in his oxygen requirement and CXR. With his respiratory status relatively unchanged, a bilateral lower extremity duplex was obtained on POD10 which was negative for a DVT. A chest CTA was notable for new prominent bilateral pulmonary ground glass opacities (GGO) which were worse on the right than left. This raised suspicion for amiodarone lung toxicity versus pneumonia, so IV antibiotics and oral prednisone 60mg QD was started that day. After 5 days of steroid therapy, he no longer required oxygen, exercise tolerance improved, and he reported that his breathing felt almost at baseline, so he was discharged on POD14 without further prednisone therapy. After 3 days however, he was readmitted (POD17) due to significantly worsening shortness of breath (SOB). On that initial day, he required around 4L/min oxygen, and chest CT angiography demonstrated bilateral PEs and GGO. Pulmonology assessed him to have amiodarone-related bronchiolitis obliterating organizing pneumonia and oral prednisone 40mg QD was started. A six-minute walk test demonstrated desaturation to mid-80% requiring 6L/min oxygen. The patient was ultimately discharged after a 15-day length of stay on home oxygen.

Discussion: Amiodarone is an antiarrhythmic agent that is often used prophylactically in cardiothoracic surgery. Pulmonary toxicity typically occurs in those taking amiodarone for months to years, but it has been reported in those receiving it perioperatively. Diagnosis is often one of exclusion. Physical exam can show progressive exertional SOB and non-productive cough, with some developing crackles, fever and hypoxemic respiratory failure potentially requiring intubation. Leukocytosis may be present. Radiology is crucial for diagnosis: CXR can show bilateral patchy or diffuse infiltrates that tend to be worse on the right side. High-resolution CT scanning often reveals more extensive disease than CXR, often showing peripherally-distributed ground glass opacities worse in the right lung and particularly in the base. Treatment with oral prednisone often provides quick symptomatic improvement, and the need for oxygen can be obviated after several weeks of therapy. 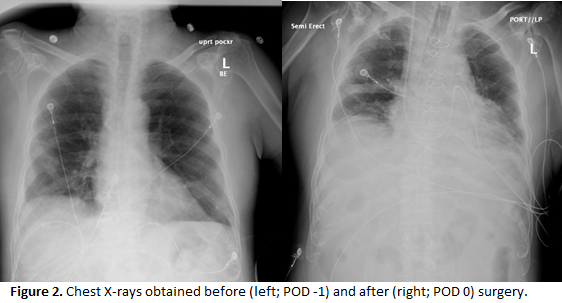 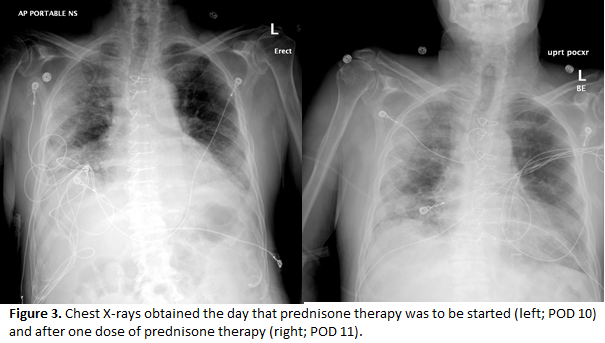 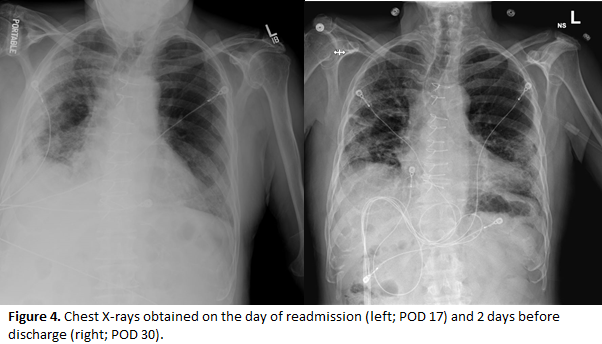