Introduction: Retinoblastoma (Rb) is the most common primary intraocular malignancy in children1.Treatment of this disease was revolutionized with the initiation of intravitreal injection of chemotherapy (IViC) which improved outcomes due to its increased ocular penetration. However, this intervention contains some theoretical risk. IViC volume placed intravitreously is associated with significant acute increases in intraocular pressure (IOP)2. These fluctuations may cause injury to the optic nerve, retinal artery and most significantly led to speculation of extravasation of vitreal Rb cells to the extraocular space following needle penetration3. We hypothesized that anesthesia maneuvers may diminish or blunt acute IOP spike following IViC and present our preliminary data.

Discussion/Conclusion: Children with active Rb with IViC-related IOP fluctuations cannot undergo alternative measures known to reduce IOP, such as anterior chamber paracentesis or ocular massage since it can increase the risk of external tumor seeding. Anesthesia interventions exist which are known to lower intracranial pressures and IOP, accordingly. These maneuvers include Trendelenburg position; propofol bolus and mild hyperventilation. Our preliminary data suggest that these maneuvers may help to blunt the IViC associated rise in IOP in children. The mean IOP increase in the 3 groups was impacted by our interventions. Group2 demonstrated the largest blunting of IOP fluctuation, with post-IViC IOP essentially unchanged (Graph2), Group3 also, combining propofol bolus with hyperventilation with median elevation in IOP of 2mmHg (-17 to 73). These results suggest that with standard-of-care intervention employed often in anesthesia practice, we may be able to blunt the acute IOP fluctuation during IViC treatment for RB, making the procedures safer in these children. 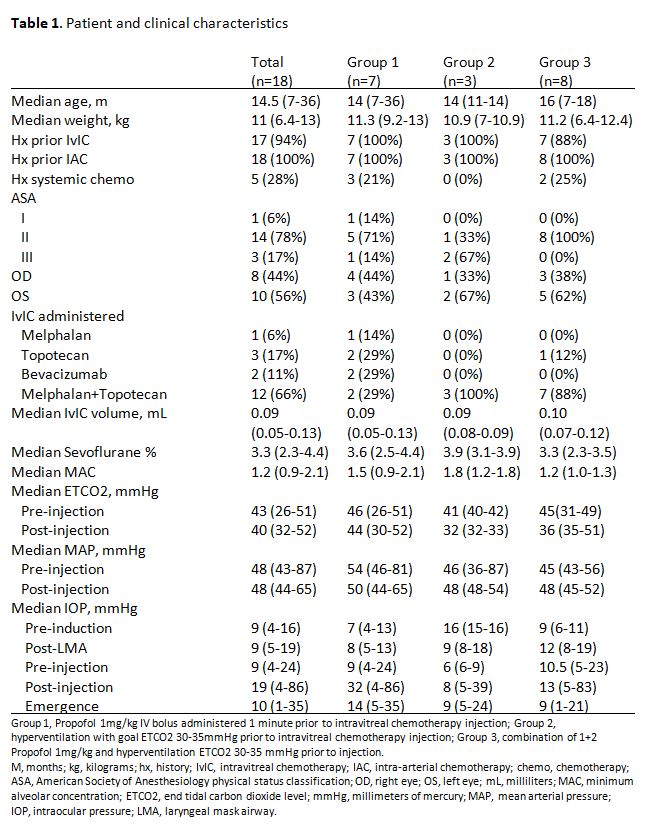 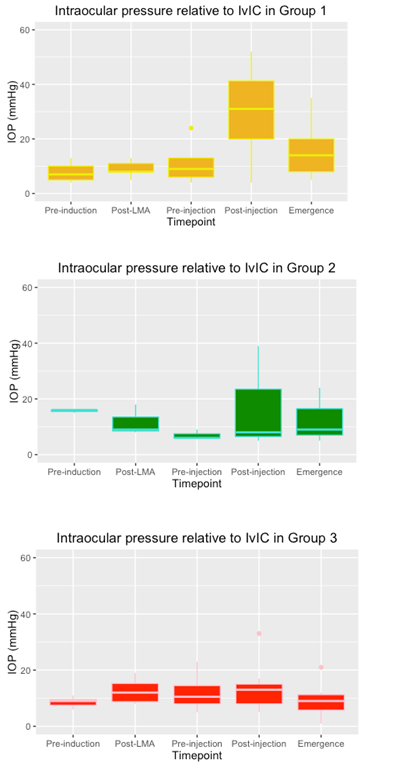