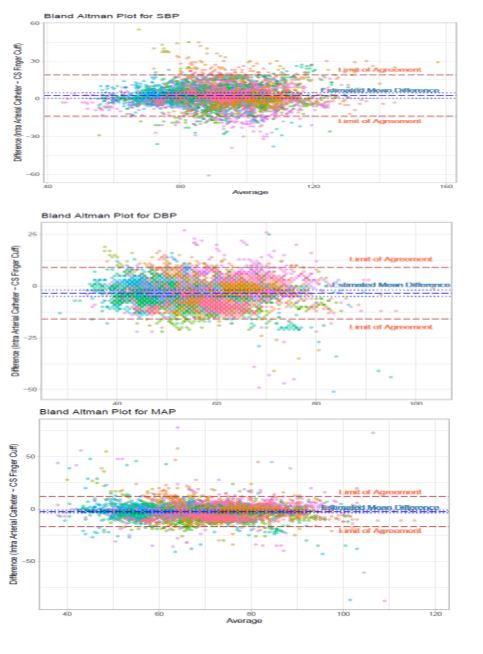 Introduction: Continuous arterial blood pressure monitoring is crucial to care during complex surgeries and in patients with greatest risk of hemodynamic compromise.  Invasive arterial lines are the gold standard for continuous blood pressure (BP) monitoring; however, non-invasive continuous finger arterial pressure (NCFAP) devices have been approved for use in adult patients. Validation of NCFAP accuracy in pediatrics is limited, and has not been demonstrated over the length of entire surgical procedures.  Our study seeks to evaluate the feasibility of using this technology for the entirety of a general anesthetic in pediatric patients.

Methods: This study was approved by our IRB; informed consent was obtained from the parents of each child. The study was performed in 25 patients under 18 years of age.  (Age range: 3 months-17 years) The decision for use of an arterial line by the attending anesthesiologist was made prior to our research team enrolling patients for the study. Invasive arterial blood pressures (IAP) were measured at the radial or femoral artery; NCFAP was measured using a finger cuff placed on the distal or middle phalanx of the second or third digit of the upper extremity. Measurements were recorded each minute and were stored electronically in the electronic medical record.  Measurements during cardiopulmonary bypass, lab draws, or arterial line zeroing procedures were discarded as artifact.  Correlation between IAP and NCFAP was calculated with r values for systolic (SBP), diastolic (DBP), and mean arterial pressures (MAP).  Mean difference in measurements were estimated from linear mixed model for repeated measures; estimated bias along with its limits of agreement were charted in Bland-Altman plots for SBP, DBP, and MAP.

Discussion: Our study shows promise for feasibility of using a NCFAP device in the pediatric patient under general anesthesia.  Correlation between the IAP and NCFAP were within accepted standards.  The MD between the devices showed a high degree of accuracy with no mean difference greater than 3.5 mmHg.  The measurement bias demonstrated between the two devices is most likely not of clinical significance given the high degree of accuracy. 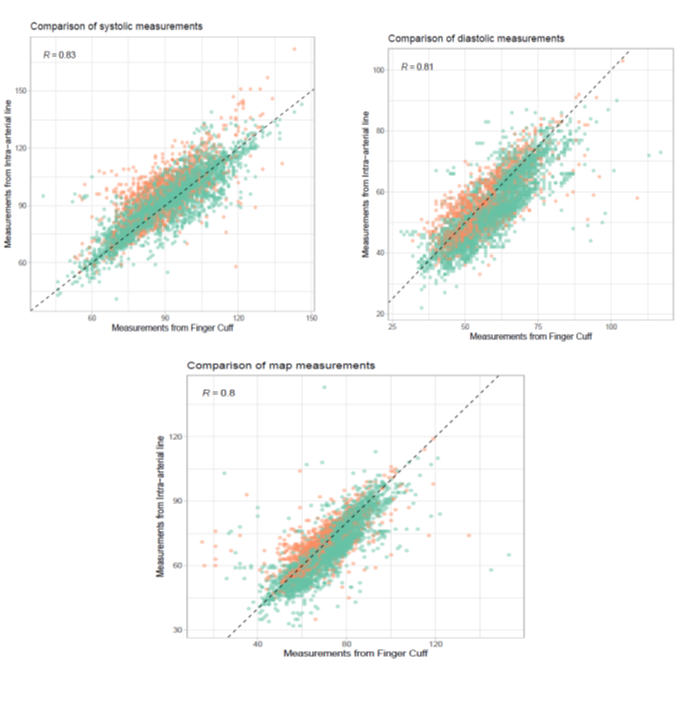