Introduction: Precordial doppler ultrasound is one of the many tools anesthesiologists can use to monitor patients for venous air embolisms (VAE). Due to the noisy environment of the operating room and the divided attention of the anesthesiologist, such an event may be easy to miss early on despite having a precordial doppler monitor in place. Incorporation of a software component that could independently monitor the precordial doppler ultrasound and alert the anesthesiologist of possible air entrainment via doppler signal interrogation would provide an excellent opportunity for earlier detection and treatment of a VAE. Generation of such a piece of software necessitates the collection of data to use to characterize the various potential sound qualities of VAE. Therefore, the goal of this study is to record precordial doppler audio in patients who undergo echocardiogram with agitated saline microbubble test, which may emulate a small VAE. The collected data will be used to see if the VAE sound can be sufficiently characterized to create an alert for the anesthesia provider.

Methods: 12 patients undergoing elective bubble studies for other indications were enrolled in the study. A precordial doppler ultrasound was placed over the right atrium/ventricle of the study participant’s heart in coordination with the echocardiography team prior to injection of the agitated saline during the echocardiography exam. The doppler audio was continuously recorded before, during and after the injection of agitated saline.  The echo video clips that were recorded as part of the bubble study were used as a visual reference for when the microbubbles were present in the heart. The recordings were then analyzed to determine if there were any quantifiable differences between the doppler audio before, during and after the microbubble study.

Discussion: Standard deviation of the mean was chosen as the method to compare changes in doppler intensity due to the symmetry the data had with the x axis (the average intensity over time would have been near 0). The standard deviation of the doppler data between patients was high, which we suspect is a result of a combination of probe placement, patient variability and potential variability of agitated saline quality. Despite a high standard deviation, the results show a clear and quantifiable distinction between absent vs present bubbles with almost an average tenfold increase in doppler intensity after agitated saline injection. This data could be used to drive alarm parameters in monitoring software for venous air embolisms. Future work will look at other possible doppler audio characterization parameters for VAE. Software based audio pattern recognition should enable VAE monitoring with an alert/alarm function in the future. 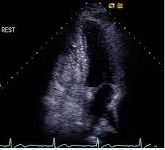 Figure 2: Plot of doppler audio intensity over time before and after agitated saline administration. 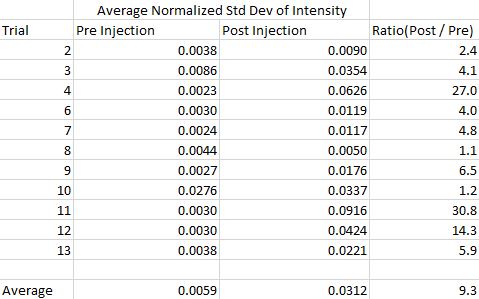