Introduction: Syringing intravenous fluid and medication boluses is a common technique used when treating various types of shock, especially in pediatrics. Although rapid infusion machines exist, they have only shown an advantage with larger catheter sizes of 16 gauge or greater. For this reason, looking at the pediatric population where smaller gauge catheters are used, research points to manual injection of bulk fluid as more efficient. Previous studies have looked at what syringe size permits fastest time of fluid administration with least hand fatigue, as well as evaluation of the disconnect/reconnect technique vs. the push pull technique of fluid administration. Currently however, there is a lack of research focused on comparing the force various hand positioning lends to the time taken to give large boluses of fluid.

Methods: Participants who are both clinical and non clinical will be recruited to perform five manual injection techniques (see figures below for techniques) to administer 100 mL of normal saline via two 60 mL syringes through a standard pediatric IV setup (Microbore IV Extension, 3-way stop-cock, microbore luer lock T - connector and 24G x ¾" catheter). Subjects will be asked to perform each technique three times in a predetermined and randomized order with breaks given in between as needed. The time taken for administration of 100 mL of liquid will be recorded as well when the subject begins to subjectively experience fatigue. 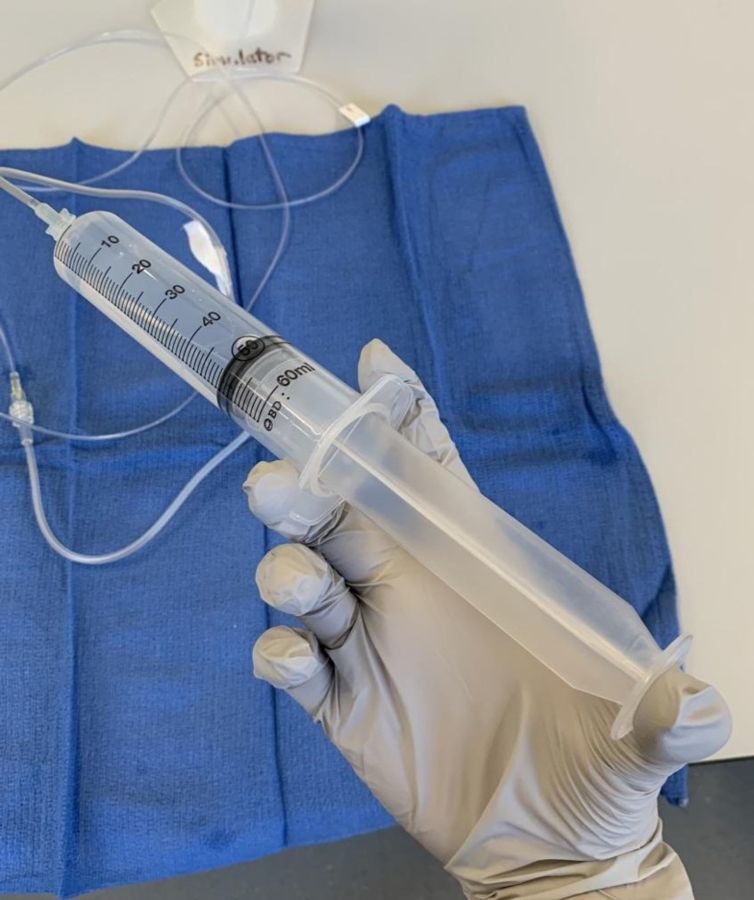 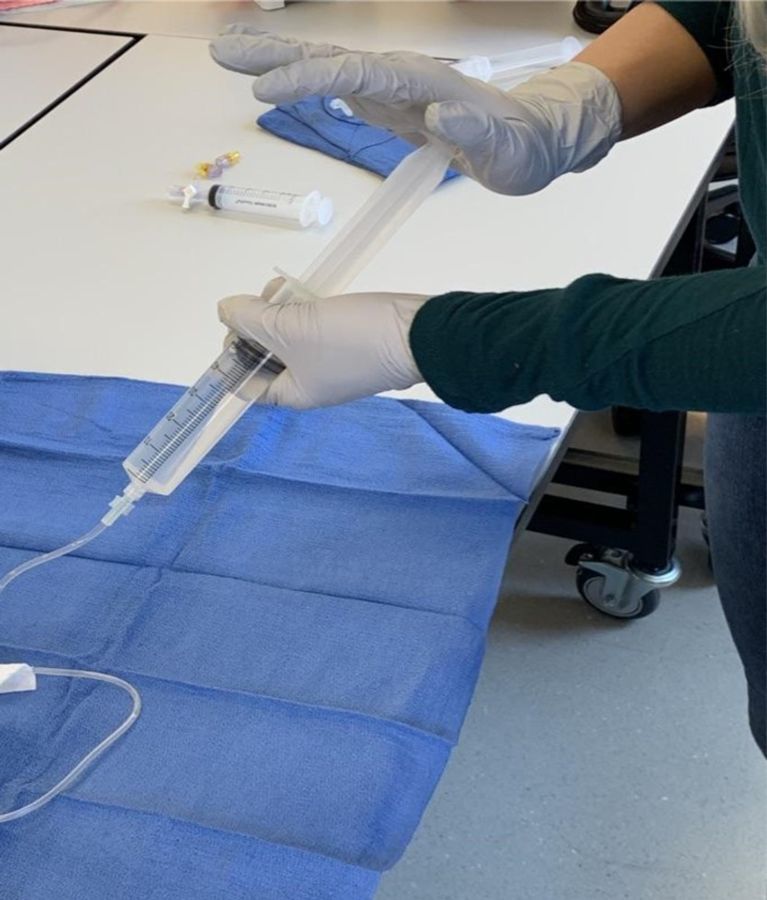 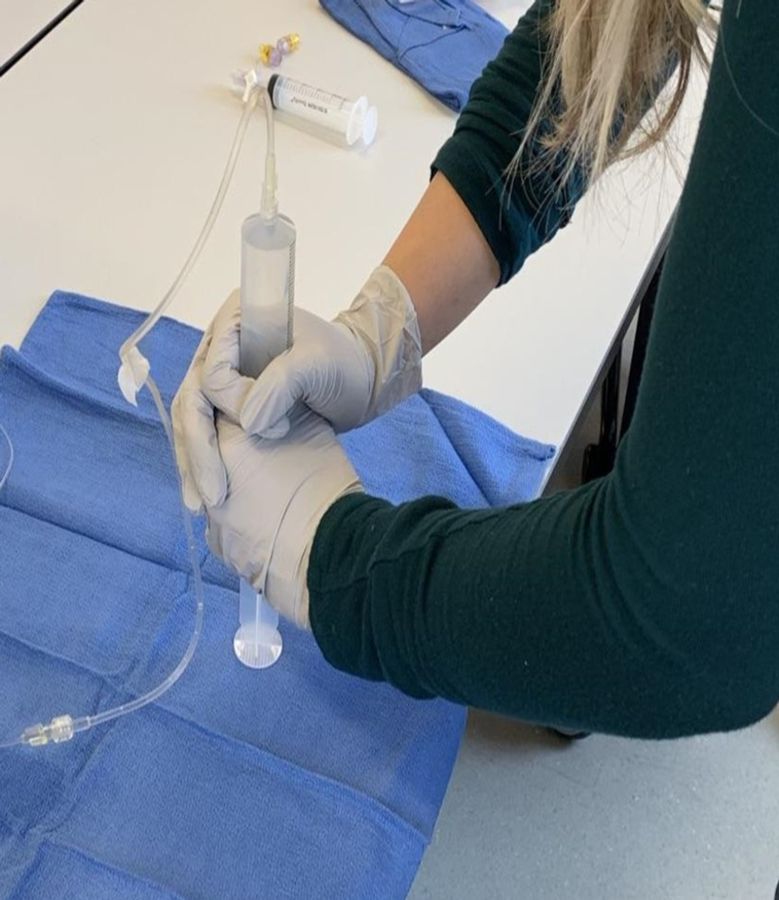 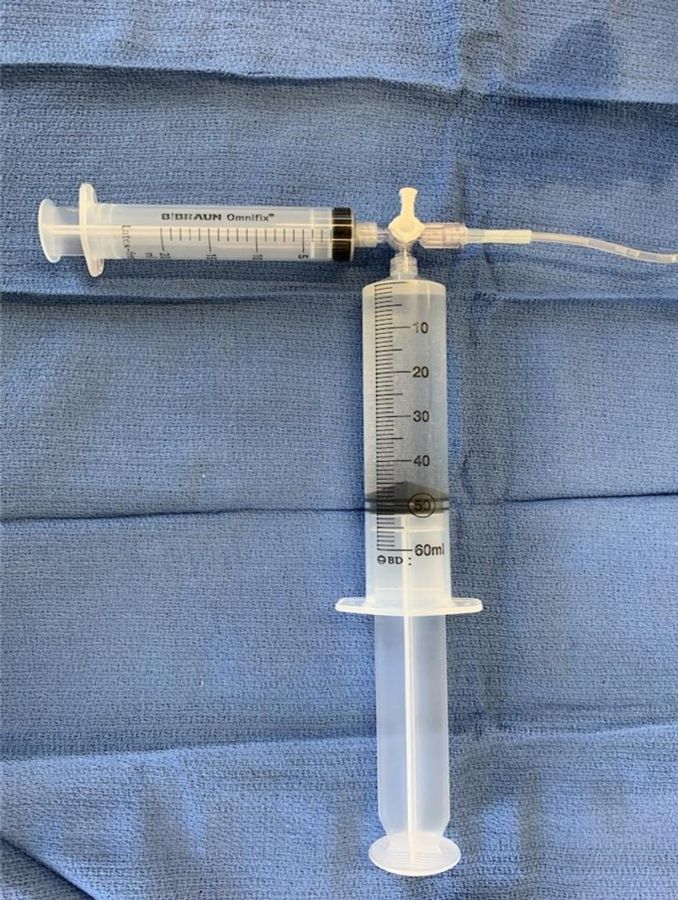 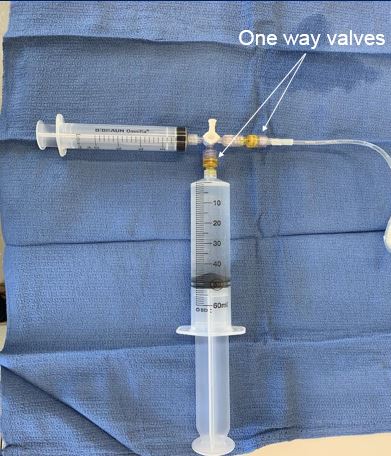 Figure 5. Two syringes: a 60 mL reservoir syringe and a 20 mL drive syringe connected via one-way valves and a T-connector

Preliminary Results: Although only a small sample of subjects have formally been recruited for the study (n=9), data so far has shown notable differences in average time spent using each technique. The one-handed method provided the slowest time of fluid administration at 190.7s when averaged between the subjects, the two-handed palm push method averaged at 100.5s and the two-handed body weight technique provided an average of 70.8s. The method that induced the greatest amount of fatigue overall was one syringe: one-handed technique using the thumb to push. The method with the least amount of fatigue reported was the two syringes connected via one-way valves and a T-connector.

Discussion: Preliminary results indicate that there is variation in the administration time of fluid boluses across the different techniques that can be used. In time sensitive situations such as during fluid resuscitation, having a pre-chosen method that has largely been shown to reduce the time taken to administer a large fluid bolus while minimizing hand fatigue can aid in saving patients’ lives. These techniques may be especially relevant for those healthcare providers who have issues with hand fatigue while syringing a fluid bolus.

If you have any questions, please contact the FSA … END_OF_DOCUMENT_TOKEN_TO_BE_REPLACED