Case: A 29 year old, 45 kg female with no reported drug allergies and no significant past medical history presented to the emergency department with complaint of worsening left sided dental pain and swelling. CT scan was concerning for a 3cm odontogenic abscess with airway compromise.  She was taken emergently to the OR for extraoral incision and drainage of a left submandibular space abscess and tooth extraction. The decision was made to proceed with a rapid sequence induction (RSI) and the patient was successfully intubated via RSI using video laryngoscopy (CMAC D-blade, grade 1 view). The surgery was completed uneventfully and two Penrose drains were placed. The patient was extubated in the OR and transported to the PACU.

Approximately 35 minutes after arrival to the PACU, the patient became anxious and was complaining of shortness of breath and inability to clear secretions. On evaluation, significant floor of mouth swelling was noted. Attempts at suctioning caused worsening anxiety and further airway compromise ensued. To rule out an expanding hematoma, the sutures were removed from the patient’s neck and the incision was explored digitally with no hematoma identified. The anesthesiology and surgical attending both agreed that given the degree of neck swelling and airway compromise, oral re-intubation was not to be pursued and the joint decision was made to perform an emergent cricothyrotomy to secure the airway given the worsening airway compromise of the patient. After infiltration of 1% lidocaine with epinephrine, an incision was made in the cricothyroid membrane and a 5.5 wire-reinforced endotracheal tube was placed. The patient was then taken back to the OR for formal tracheostomy and exploration of the neck and floor of mouth. No evidence of hematoma or significant bleeding was found in the submandibular space. Diphenhydramine (25mg) and dexamethasone (8mg) were administered and the patient was taken to the surgical intensive care unit (SICU). The patient remained hemodynamically stable making the diagnosis of anaphylaxis less likely. A post-operative CT scan was obtained and findings were consistent with angioedema. The patient’s tracheostomy was downsized on post-operative day (POD) 5, and she was decannulated on POD 6. The primary surgical service attributed her angioedema to ampicillin-sulbactam given intraoperatively; however, the patient underwent outpatient allergy testing and was found to not have a penicillin allergy. She refused further allergy testing secondary to financial constraints.

Discussion: Angioedema presents as facial and airway swelling and can lead to airway compromise and death. Many medications used during general anesthesia are known to be triggers of angioedema, which complicates identifying the offending agent. Regardless of the cause of medication-induced angioedema, it is imperative that proper equipment and skilled medical providers are available to maintain airway patency. 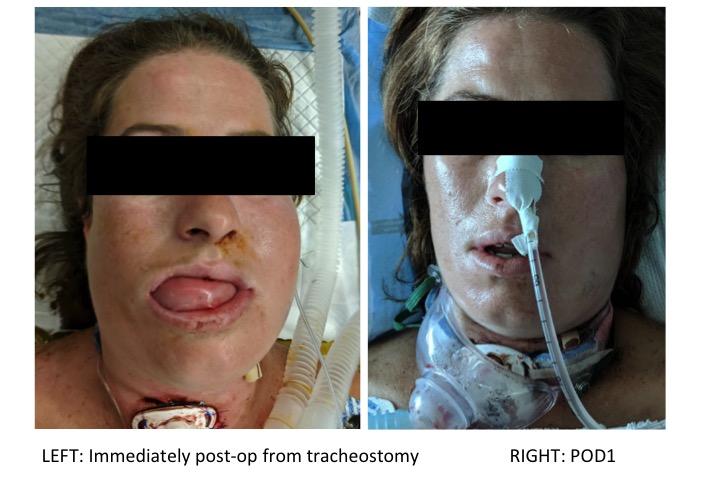 If you have any questions, please contact the FSA … END_OF_DOCUMENT_TOKEN_TO_BE_REPLACED