Introduction/Background: Few reports have evaluated postoperative continuous thoracic epidural analgesia on patients who received lung transplant. This analgesic modality may facilitate extubation, early ambulation, and achieve adequate pain control with minimization of opioid use. An opioid sparing technique could minimize the side effects of opioids such as ileus, constipation, and somnolence.

Methods: A retrospective chart review following IRB approval from the University of South Florida was performed. Data were evaluated on the effects of continuous epidural analgesia initiated postoperatively as compared to standard intravenous analgesia. All patients were recruited upon request of surgeons at Tampa General Hospital from April 2015 to March 2017. Inclusion criteria were age over 18, and single or bilateral lung transplantation. Forty-eight patients received T10-11 epidural, and forty-eight patients that had contraindications for placement of thoracic epidural, such as coagulopathy or anticoagulation, were given intravenous analgesia.  Primary outcomes were length of time spent in the ICU, total duration of hospitalization, need for reintubation or noninvasive intermittent positive pressure ventilation (NIPPV), need for IV lidocaine gtt, and total narcotics consumption during hospitalization in milligrams of morphine equivalents (MME).

Placement of epidural catheters followed the standard of the American Society of Regional Anesthesia guidelines. Epidural placement was usually performed in the first few hours after admission to the ICU, while the patient was still sedated and intubated or ventilated. Epidural infusions consisted of a 2.5mL bolus 0.1% to 0.2% ropivacaine administered at 8 mL/hr  given every 30 minutes for a maximum 13 mL/hr  and increased as needed for uncontrolled pain. Patients were assessed daily for adequacy of pain control and to assess for any complications associated with epidural placement. Additional medication for pain control was given as needed.

Results: Continuous data are presented in the form of mean ± one standard deviation. Categorical data are presented as proportions. Continuous data were analyzed using a two tailed t-test with a significance of p < 0.05. Categorical data were analyzed using a fisher’s exact test with a significance of p < 0.05.

Discussion/Conclusions: Our study indicates that for patients undergoing lung transplant, epidural analgesia is a viable alternative to intravenous pain control. Further, it significantly reduced respiratory depression and length of stay in the ICU. More refined comparisons can be made by conducting a precise prospective study with a more structured protocol in place. 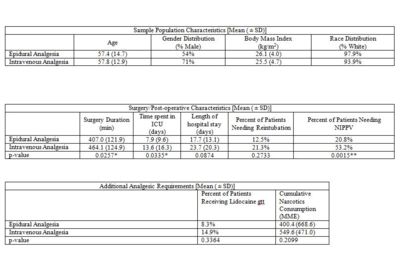