Introduction: Pneumothorax is a frequent complication of invasive procedures involving the airway.  Pneumothorax occurs in 5–10% of patients after transbronchial lung biopsy and in 10–20% after percutaneous needle biopsy of peripheral lung lesions.1. We present a case of pneumothorax discovered during the induction of anesthesia for a mitral valve replacement (MVR), and discuss the important role of clinical judgment in the management of this situation.

Case Presentation: This case involves a patient who presented with severe mitral regurgitation and was scheduled for a mini right thoracotomy-MVR. The patient’s preoperative evaluation was significant for a personal and family history of malignancies. On the day of surgery, the patient presented without respiratory symptoms.

General anesthesia was induced smoothly. Intubation was done with Univent-tube. While performing bronchoscopy for lung isolation, the anesthesiologist discovered a right endobronchial lesion.  A lengthy discussion took place to determine if this case should continue or be postponed.  We took into consideration that performing biopsies would be a contraindication to the anticoagulation required for cardiac bypass.  Due to the patient’s personal and family history of malignancies, it was decided that a biopsy of this lesion should take priority. Thus, endobronchial biopsies were performed. Two lesions were discovered: in the right main bronchus and the right upper lobe ostium. The patient was extubated and CXR was performed. Final pathology showed amyloid. 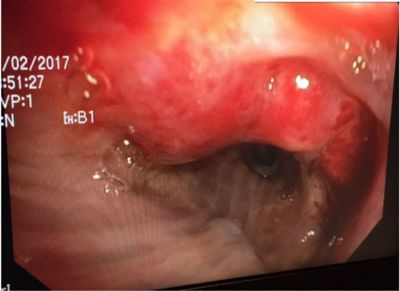 Nineteen days later, the patient presented again for MVR. After a smooth induction and what appeared to be an easy intubation with Univent-tube, there was no ETCO2. The patient was extubated and bag-mask ventilated, obtaining good ETCO2-waveform. While looking for possible causes, ETCO2-line and line-cartridge were replaced, and intubation attempted again.

ETCO2 remained absent after the second intubation attempt. Esophageal intubation was considered despite an adequate view of the vocal cords during direct laryngoscopy. The decision was to extubate and proceed with bag-mask ventilation again. Assistance was called.

Under these circumstances, a discussion among healthcare providers took place. A decision was made to proceed with the scheduled operation. 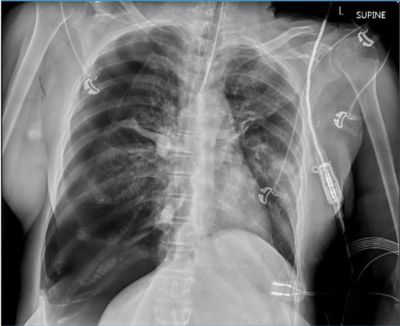 Discussion: Pneumothorax can be a silent condition. Delayed-pneumothorax may have no manifestation in x-rays taken during the first 3-hours following a procedure.2,3,4. Anesthesiologists must have the ability to diagnose life-threatening conditions, even in an unlikely scenario, and prevent possible harm to the patient while administering anesthesia. Clinical ability and judgment play an important part in ruling out differential diagnoses and considering next steps during challenging cases.