Intro: Preop assessment & medical optimization of patients (pt) scheduled for elective procedures is paramount in achieving a high level of pt safety. Vascular surgery (VS) pts have pre-existing co-morbidities1 that confers a higher risk of complications. This study is aimed at examining the incidence of preop type & screen (T&S) performed at our institution for elective VS procedures over a year.  MSBOS (maximum surgical blood order schedule) is an institution specific system to reduce unnecessary blood ordering & decrease hospital costs2. Our institution’s MSBOS guidelines state moderate to high risk VS procedures warrant preop T&S. We hypothesize that T&S is not being performed uniformly for pts receiving mod to high risk VS. Secondary hypotheses are that age & gender are confounding factors for whether or not pts receive T&S.

Conclusions: Data collected from this study shows that not all mod to high risk VS pts receive preop T&S at our institution.  Clinical opinion between surgeons may account for this. Mod to high risk VS like distal revascularization & aortic surgery should have preop T&S. Factorial analysis of data is ongoing to identify reasons for lack of uniformity. Future investigations will aim to improve pt care & safety practices.  Findings & methods from this study may be used to investigate similar parameters in other subspecialties, especially in a cost reducing culture where unnecessary tests are avoided3. 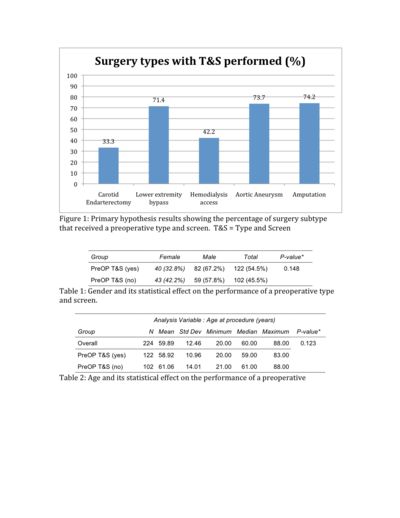